Command & Conquer: Rivals for Android is a real-time strategy game for mobile, which was developed and released by EA. This is the latest product in the famous long-running RTS series, which started in the 90s and has impressed the gamers who love the strategy game genre. Although the game targets the mobile market, it still requires good game preparation, good planning and management capabilities to get the victory. Command & Conquer: Rival focuses on PvP battle, taking advantage of mobile devices’ touch screens to provide a military control experience. 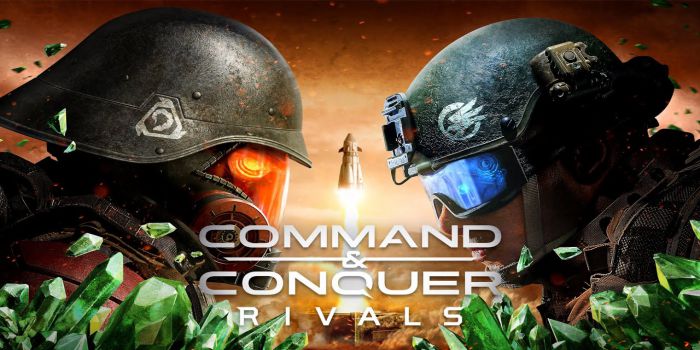 Command & Conquer is an extremely attractive real-time strategy game series on PC. A lot of people love. It is considered as the beginning of the RTS genre. The game still maintains the basic plot of the C&C series. It takes you into a new war between the two factions Global Defense Initiative and the Brotherhood of Nod. Besides, players will be given the choice to fight for any side they like, leading the army to win the Tiberium War. To get the victory, players will have to perform a series of tasks including controlling resources, customizing troops, gathering infantry, weapons, combat vehicles and perform the military command to fight against the enemy. Also, you can freely fight the opponents in 1vs1 battles like Clash Royale. The ultimate goal is to win. In this war, the commanding ability is a key point of the victory. 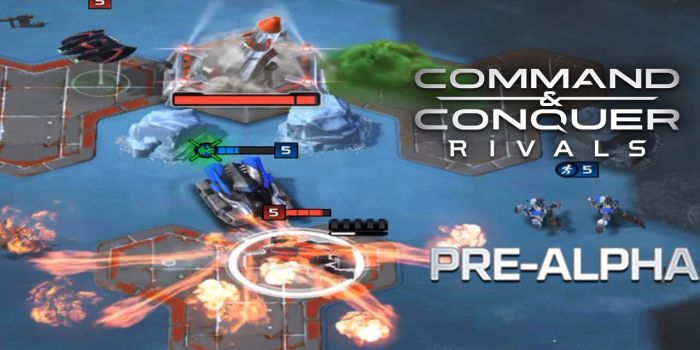 In Command & Conquer, the gameplay is easy to understand. Each side has a base and four slots to build military works. However, you do not need to operate the Tiberium mining. Gamers can buy a mining vehicle and let it work itself. In the game, you will win when destroying the enemy base in two ways: Occupying the Capture Points to direct the nuclear missile toward the enemy base, or directly using your army to attack their “main house”. The game’s tactics are based on the attack and defence system with three types of units infantry, mechanics and air force. You will attack the enemy’s defence system while commanding your troops to stop the enemy fire. Therefore, the game is always a 1vs1 confrontation. No one is useless in this game. 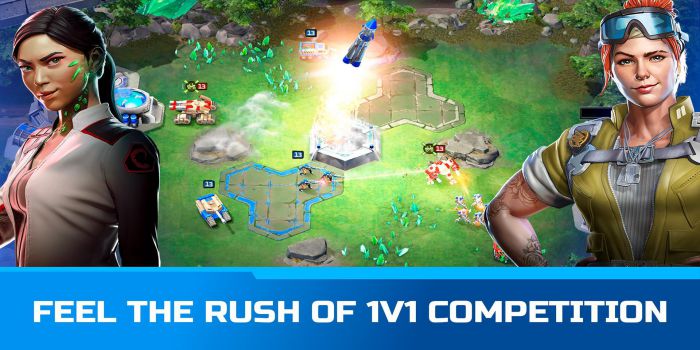 Due to the brand of Command & Conquer, the military unit system of the game gives gamers the necessary familiarity. You can play both the NOD and GDI factions. However, the game only allows you to use GDI until your account reaches level 9.

While GDI is relatively simple thanks to direct fighting style and easy-to-understand effects, NOD requires more skills because their units are designed for small-scale tactics or guerrilla attacks. You can see some special effects such as Scarab or Chemical Warrior that damage all units, or Attack Bike that has 3 units in the team instead of just one. Therefore, they have higher damage though it is quite easy to play. Besides, Scrin is also mentioned in the game. This is the alien force appeared in Tiberium Wars. Maybe EA will add this force to the game in the future. 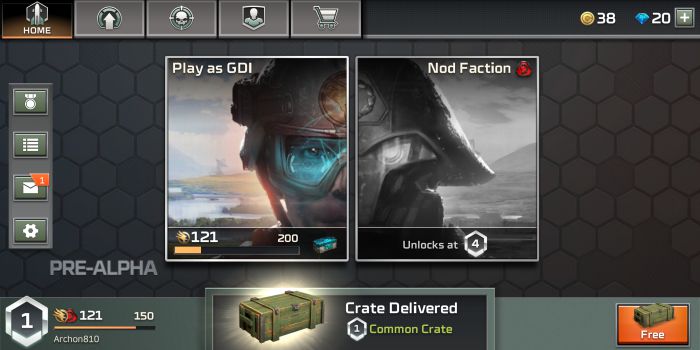 In Command & Conquer: Rivals, each type of troops is represented by a card, divided into normal/rare/unique levels. You can upgrade one type of troops 3 times per level with money. With every time upgrade, you can increase a little bit of the index for your characters. After 3 upgrades, you need to level up the unit by giving it the same cards. The higher the level is, the more cards you will need. These cards fall out randomly from the chests you get when you are levelled up or from the Bounty mission, Convoy convoys (a simple free chest feature). However, they are never enough. If you want to level up faster, you need to spend real money to buy both virtual money and chests in the store. If you are lucky, you will get an amazing chest.

Besides, another interesting feature is when Command & Conquer: Rivals released a new type of army. EA would bring a package containing that kind of troops and items needed to upgrade it into the game’s store. Their prices are quite expensive so you must consider buying them. EA also tries to reward free gamers with a system they call “Fairplay”: when players with low-level troops meet high-ranking men, you will receive more points when you win as well as lose very little (or not lost) when losing the battle. 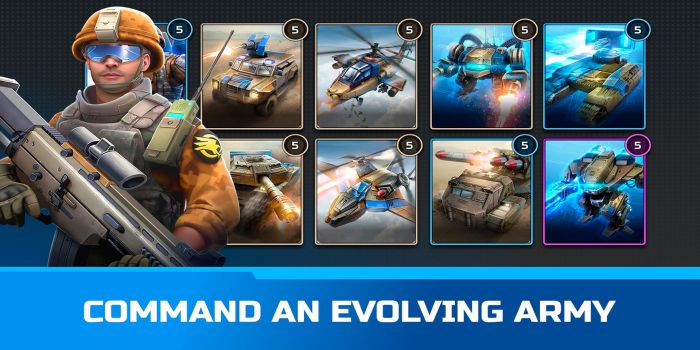 Currently, Command & Conquer: Rivals only have a ranking mode, with rankings increasing from Iron, Bronze, Silver, Gold, Platinum, Diamond, Master and Tiberium. The game will automatically create matches depending on your rank. Overall, the battle in Rivals proved quite attractive and exciting. Besides, the game makes the balance between the players because Rivals limits the maximum level of units you can put into battle – even if you have upgraded to level 9 or 10. If you are still in Silver rank, the units can only be count as level 8. The more you rank is, the more the higher-level units you can use.

The game has been released globally for gamers. Besides, this game is also changed, updated with new content including: 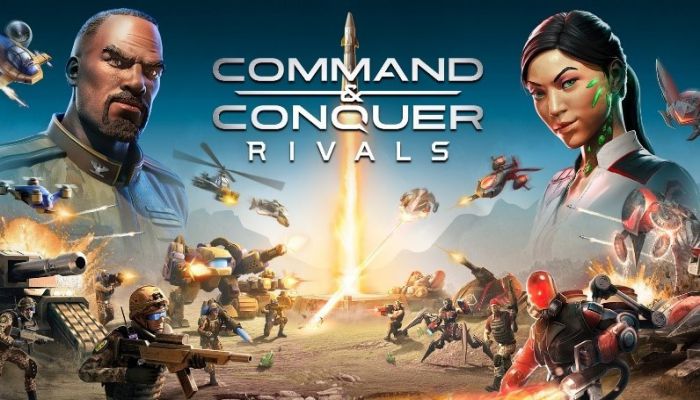 Overall, Command & Conquer: Rivals has simple but tactical gameplay of Rivals. EA is successful in keeping the resource collecting mechanism, buying troops and commanding generals. Besides, the game provides the familiar units that helped gamers experience the feeling of Command & Conquer every day. Let’s download and enjoy the game right now! Thanks and have fun!