Dan the Man MOD APK (Unlimited Money) is an extremely exciting adventure game from the developer Halfbrick Studios. This game first appeared in March 2010. However, it was not a game but a series of YouTube videos uploaded by Joho Studio. This series quickly attracted a lot of viewers because each episode has a graphic style similar to the platform game genre on the console. Please join us to find out more about this interesting game right now!

In the game, the story is about a guy named Dan. He has a happy life with his girlfriend – Josie in the peaceful countryside. But disaster suddenly came. Specifically, Josie was kidnapped by some bad guys. They took her to a distant castle. Dan had to join a journey to fight and search for his girlfriend.

At this point, most of the audience thought that the content and graphics of this series were ideal for creating a perfect scene-scrolling game. But for some reason, Joho Studio members did not develop such a game. Perhaps some conditions were not matching. Instead, they have devoted all their enthusiasm and ideas to each image or video. In June 2016, Dan the Man officially appeared on the Itunes Store under the cooperation of Halfbrick Studios (developers of Jetpack Joyride and Fruit Ninja) and Joho Studio. An Android version was launched not too long later.

This game is considered as the 8th part, which follows the content of the other 7 parts of the movie Dan the Man. At this time, Dan’s village was being destroyed by the dark forces. In the game, your mission is to help Dan fight the bad guys and protect the village. Thereby, he can track and find his girlfriend.

In Story mode, Dan the Man MOD APK includes 12 stages with lots of missions for players to explore more about the characters and the world of the game. Besides, there are many mysterious treasures waiting for you. In addition to Dan, you can join the game from the perspective of many other characters like Josie or Barry Steakfries. Is Barry Steakfries, isn’t he? You are correct. It is Barry, who is a special guest from Jetpack Joyride. It seems that he got bored with the labs and decided to help Dan protect the village. Also, the game has two other modes, consisting of Survival and Weekly. 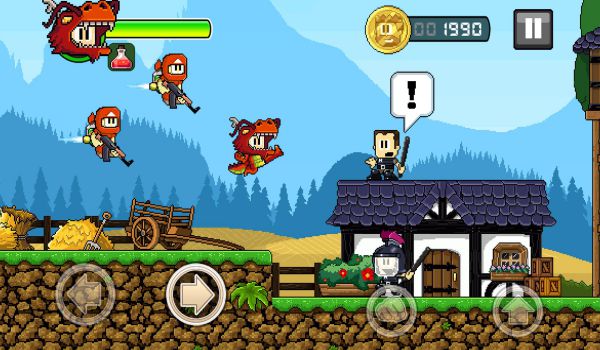 Like classic arcade games, players can control the characters via a controller with 5 buttons including Jump, Left, Right, Attack and Shoot. By combining the control keys and the Attack key, you can create beautiful combos that deal more damage. Besides, you can use the Shoot key when you own long-range weapons, such as knives, shuriken, darts, Barry Steakfries’s guns, etc.

To help players feel progress through each stage, the game allows you to upgrade your character’s power, buy armor and weapons. Besides, you can learn new skills every time you level up. 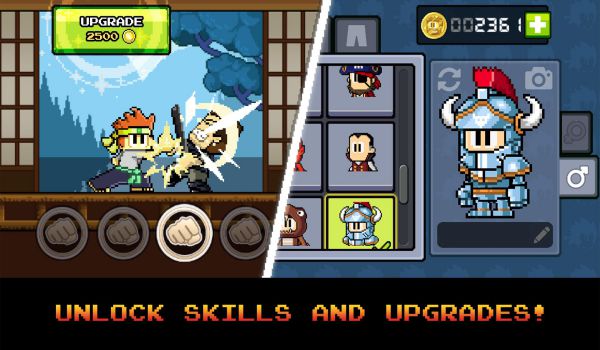 Unlike the other current games, Dan the Man has 8-bit 2D graphics, which are often found in classic landscape scrolling games. It somewhat reminds me of the legendary Mario game. Besides, the characters are designed cutely. Specifically, there are many types of enemies, such as robots, ninjas, etc. In each stage, you enjoy a new landscape. This gives you the best experience. 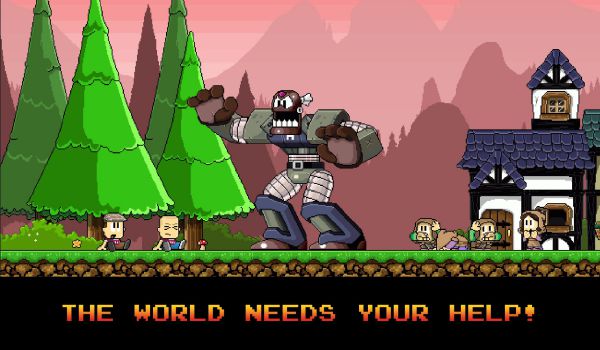 In this article, we would like to introduce to you a modified version of the game named Dan the Man MOD APK (Unlimited Money). It gives you a large amount of money right from the beginning of the game, so you can freely buy any items you like. This feature will make your game easier and more interesting. Readers can download the game at the link below.