Game Dev Tycoon is a great business simulation video game, which was developed by Greenheart Games. It was first released on mobile devices running IOS operating system. Recently, the Android version of the game has been released, which has made the players very excited. Game Dev Tycoon was inspired by the process of formation and development of Greenheart Games, a company founded in July 2012 by brothers Patrick and Daniel Klug. In Game Dev Tycoon, you can review the history of the game industry by starting your video game development company in the 80s. Your mission is creating the best-selling game with new technology. The ultimate goal is to become the leader of the market and get great reputation worldwide.

In the early 80s of the 20th century, when the entertainment industry was forming and developing, some inventors decided to switch to a new category: electronic entertainment. It was also known as game, which created a lot of profits for producers in many countries. You will start work in a cramped design room with little budget. From here, the games have officially approached players over the world.

After you finished developing your first simple game, you will gain experience; unlock new customizations; create new games with new options; the first game tools were built; develop skills for experienced players. In addition, the new consoles will also be released, so players can buy licenses for certain consoles such as the GS, PlaySystem, mbox and grPad. Besides, if you have enough money, you can create your controller on the console as well as customize Game Engines. 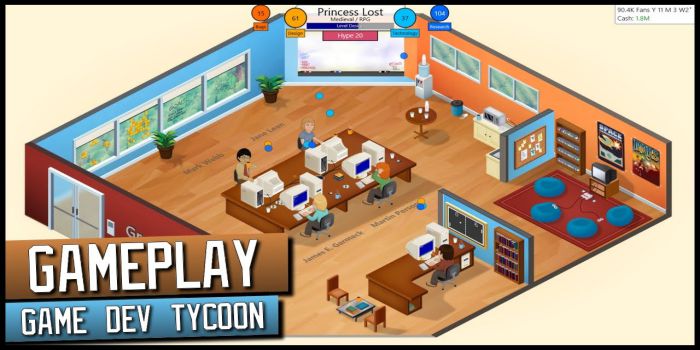 The highlights of Game Dev Tycoon

In Game Dev Tycoon, your decision in the development process is really important. You can develop your company – make bigger games or make more complicated AAA games, decide the type of game you want to focus on to enter. Besides, you have to consider if your games need more gameplay or you should focus more on quests or not… These decisions will have a big influence on the success of your game. 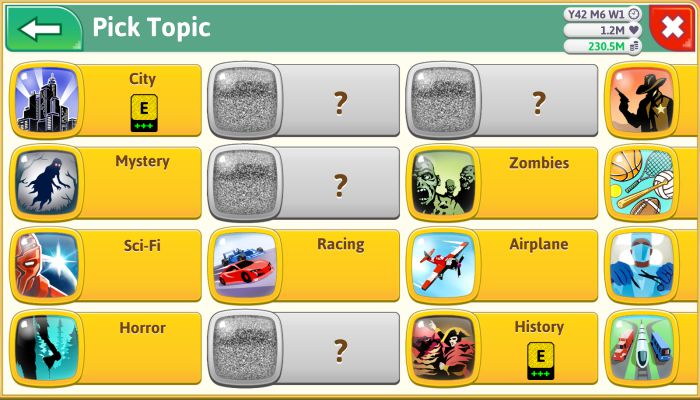 Once you have successfully released the first game titles, you can change your office, hire more staffs and train them as well as unlock many other options. After earning more than $1 million, players can rent an office and start hiring staff. Players will seek development opportunities when participating in game design exhibitions, attract a large amount of fan or steal the secrets of competitors. Then, players can move to larger offices, hire more employees and develop more complex games. 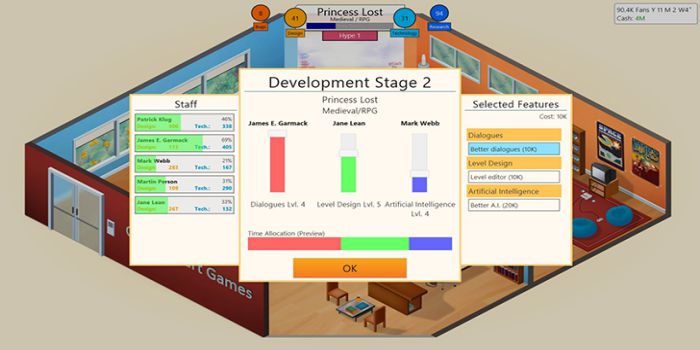 In Game Dev Tycoon, players will manage a team. Your task is to guide, train your employees and give tasks to them. Besides, you have to unlock game labs and implement important projects. The new labs and projects that you implement can change the game industry. There will be many secret projects that you need to complete.

Protect your ideas and projects

In addition, a very important factor that manufacturers put into Game Dev Tycoon is to prevent the game from copyright violations. If you can’t control the number of games that fall into the hands of the game crack teams, your company will almost lose its games or even bankrupt. It can be said that the manufacturer put this feature into the game is a step to deal with pirated games, which are more and more popular.

Game Dev Tycoon has 2D drawing graphics that are quite beautiful and suitable for the classic style of the game. Besides, the sound is funny. The game is rated as quite friendly and stimulates the creativity of the player. 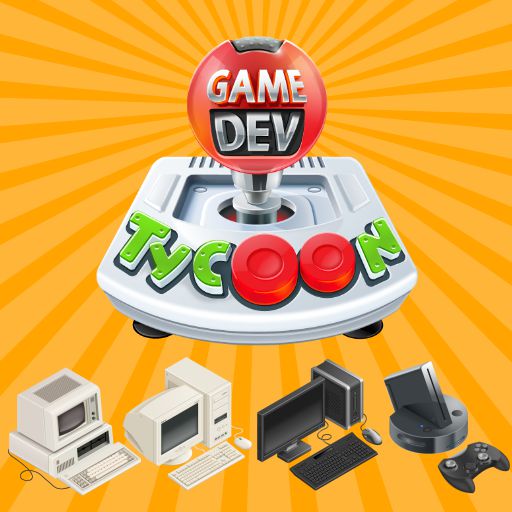 How to download and install Game Dev Tycoon APK MOD

As mentioned, Game Dev Tycoon is a paid game on Google Play. So, we recommend buying it to support developers. However, for some reason, you can’t pay, please scroll down and see the instructions for downloading and installing our APK file for free. Besides, your device needs to run Android 4.1 or higher with 120 Mb memory and 1G RAM so that the game can run smoothly. Please the instruction below:

Game Dev Tycoon is definitely a great game, which provides practical information on how to develop, secure a game. Thereby, it gives you a good view of the game industry. You can learn and open 1 small game studio. It may become a bigger company. Let’s download and make your dream come true right now!