Playgendary is a popular game company with many fun games like Perfect Cream, or 3D Polysphere. They have been getting more and more success in the gaming market. Today, we would like to introduce to you a new interesting game named Hitmasters APK (MOD Unlimited Money) . This is an extremely fun shooting game. Unlike other games of the same genre, Hitmasters has a slow pace that combines shooting and puzzle gameplay. How will you overcome these challenges with a gun and a small number of bullets in your hand? Please join us in modgameapk.net to check it right now! 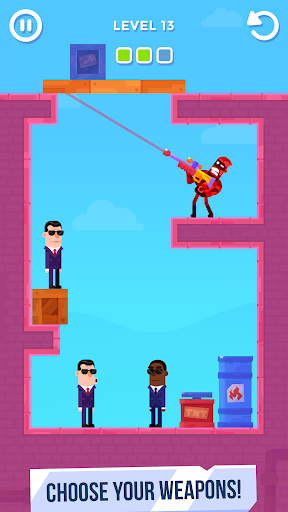 Like most games from Playgendary, Hitmasters MOD APK is developing towards minimalist touch gameplay. During the game, you just need to touch the gun, adjust the target and shoot with one hand. When you have locked the target, you can release your hand to make a shot. However, making your bullet fly in the right direction is not easy.

Besides, you have the task of destroying other bad guys with guns and limited bullets. It sounds simple, but the hard thing is that the bad guys won’t be standstill. Instead, they will sometimes stay behind every wooden crate, a stone or somewhere above you. With a small number of bullets in hand, you must try your best to destroy them in many different ways.

Although Hitmasters MOD APK belongs to the shooting genre, it is aiming to solve the puzzle. Therefore, before each stage, you should calculate how to use the bullets the best. You can shoot at the stone so that it falls on the enemy’s head, shoot through the wooden box or shoot at the bridge to bad guys fall into the sea. Also, you should pay attention to the gasoline drum on the maps. If you aim and shoot at them, you can kill quite a lot of enemies at the same time. 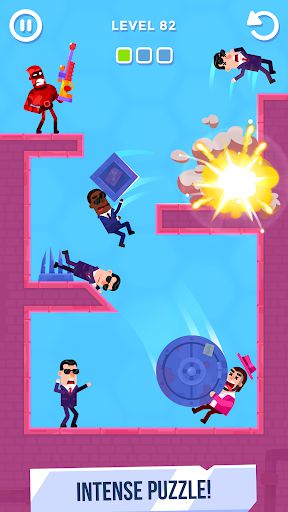 In Hitmasters MOD APK, the main weapon is a gun. If you are too tired of shooting with a gun, you can use ax or hammer or even a guitar. By collecting money after each game screen, you can unlock new weapons. Besides, you can unlock more skins for your characters, such as Spiderman, Superman or Batman… 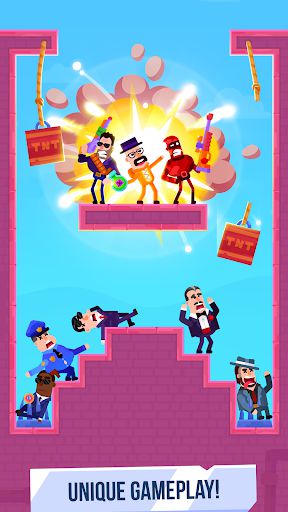 In addition to the CH Play version, you can completely own all the weapons and character skins through the mod version of the game named Hitmasters APK (MOD Unlimited Money). It will unlock everything for you and make your game more interesting. Readers can download the game at the link below. Thanks and have fun!