After the successful part 1 that was released in 2011, Barry will return to us in the endless shooting game Jetpack Joyride 2 MOD APK. This is part 2 of the famous game series Jetpack Joyride founded and developed by Halfbrick Studios. The game has achieved a lot of awards as well as positive feedback from gamers.

Specifically, Jetpack Joyride 2 has been launched on both Android and iOS platforms. Now, instead of simple runs, our guy Barry will be equipped with guns to destroy obstacles on the way. In this article, readers can download the original version or get more advanced features from the MOD (Unlimited Money) version. Please join us to find it out right now! 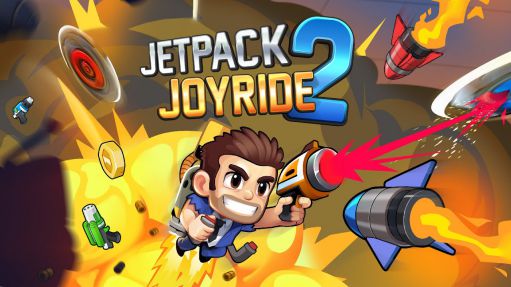 In this return version, the developer Halfbrick Studios has equipped Barry with a really powerful gun to destroy all the enemies on the runway. However, the game still follows the concept of an endless-running style. Besides, the graphics of the game have also improved a lot compared to 10 years ago. You will be fighting in many different spaces, such as spaceships, snowy mountains, caves… More specifically, the bosses will have the power to make you sweat to defeat them. 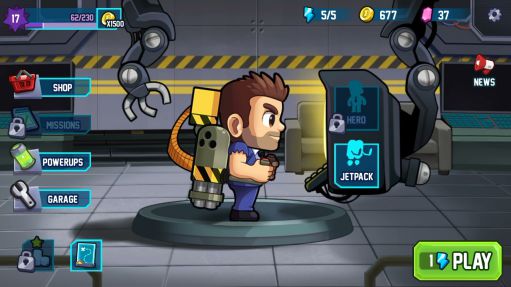 In terms of gameplay, Jetpack Joyride 2 has a control style that is quite similar to the first version. The only difference is that you can use weapons to help you escape easier and thriller. In the beginning, players can have a backpack containing a booster within. Its fuel seems to be endless. But there is one annoyance, which is the speed will increase over time. At this point, gamers need to react faster and faster to avoid the traps on the road. Besides, the health bar above the screen will allow you to monitor the character’s health. If it reaches 0, he will die and you have to replay.

Overall, the gameplay of Jetpack Joyride 2 is more complicated than the first one. Ignoring the need to use more weapons to fight the enemy, having more enemies, faster speed increases, and “super hard” bosses will also make you feel harder. 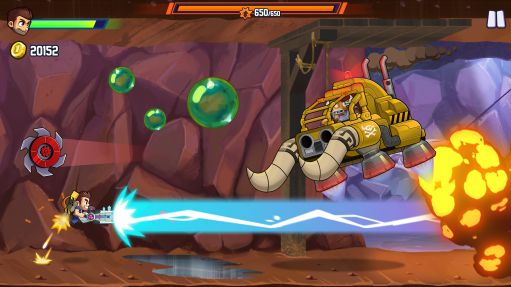 Moreover, Barry will have to fight against new enemies. They are more and more aggressive than part 1. Also, after each stop point, rockets will accelerate, appear more and more powerful enemies and the pitfalls accordingly. The distance after the 650m marks will be really a nightmare for new players. If you want to go far in the game, you will need more agility.

Jetpack Joyride 2 offers 3 vehicle types, including Big Stomper, Galaxy Ship and Gravity Suit. They act as armor to protect you from damage. Besides, they are integrated with many modern weapons with greater strength. Also, these vehicles are upgradeable. Meanwhile, the longer they can protect as well as the higher damage and faster movement. You even have an upgrade package that collects gold coins on the way.

Besides means, weapons are indispensable. They play an important role in the game. Specifically, players can check their stats in the shop before carrying them into battle. Some weapons have high prices, high damage and superior features, such as flamethrowers, lasers, and stun guns. Along the way, there are some power items, which you should collect to play better. 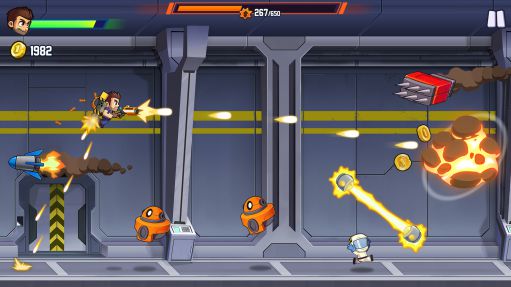 Unlimited gems, coins: In Jetpack Joyride 2, Shopping, upgrading weapons as well as vehicles is quite expensive. You can collect coins along the way, but they are quite time-consuming. For simplicity, you can download Jetpack Joyride 2 MOD APK (Unlimited Coins, Gems), which will bring you an unlimited budget.

Jetpack Joyride 2 is a great game, which has been widely released under the name Jetpack Joyride 2: Bullet Rush in some countries such as AUSTRALIA, New Zealand, Canada… If you do not belong to these countries, you can download the original file or the MOD APK version is via the link below. If you have any questions about it, please leave a comment in this article. Thanks and have fun!