At this point, it is still with the familiar tower defense style. Mini War: Idle Tower Defense takes players to many types of maps such as forests, caves, deserts… You have to overcome different challenges in each level. Specifically, the task is very simple, you control your soldiers and weapons to the marked places on the way. Here, they will fight for you, so you have to stop the dark army from coming to steal the crown.

To maximize combat power, you need to upgrade your defensive towers as well as your soldiers. By pairing defensive towers of the same level, you will get a higher level tower. For example, when pairing 2 levels 1 cannon, you will get 1 level 2 cannon with twice time as much power and range as the level 1. Besides, the dark army will be stronger over time. Therefore, players must upgrade as soon as possible. 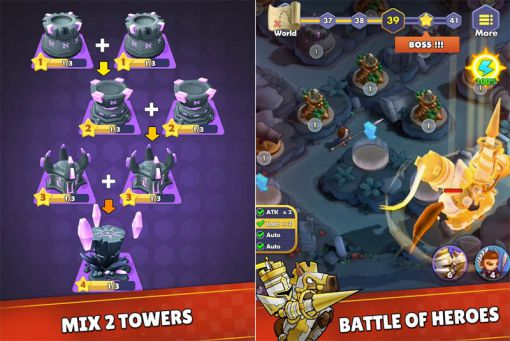 – Defensive towers: they are the main means of damage and are on the front line against the enemy. Although they have a rather fancy shape, the damage cannot be underestimated.

– The artillery: They are weapons when dealing a large area of damage. Also, you should place them in where enemy troops are gathered at the same time. Although they do not kill the enemy immediately, they will serve as a foundation for the defensive towers to destroy the enemy faster.

– The hero: Each troop only appears 1 hero. You can put them at anywhere along the way. Besides, the hero has quite a large damage but fighting directly with the enemy will cause him to die. So, you should upgrade him to the higher levels for more power.

The map system is really diverse. Each level will have a different terrain. So, you will have to stick for a long time before you can switch to a new level or map. Especially, the path will change according to the terrain, so you have to work out where to place your weapons to optimize the ability to destroy the enemy. 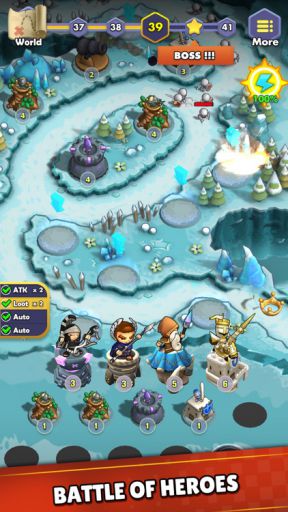 Unlocked All: Mini War: Idle Tower Defense MOD version will unlock all the features from the basic to the advance, including Characters (Heroes), Weapons (Turrets, Turrets), and maps.