Mr Bow is an attractive stickman archery game from ONESOFT. The game is extremely fun with the intense fighting battles. It features simple graphics and interesting gameplay. After being released, Mr Bow has captured a lot of love from gamers worldwide. Let’s together with modgameapk.net to check out the great game right now!

Mr Bow has simple gameplay like other games that you may have played before such as ANGRY BIRD MATCH or GUNNI for PC. In Mr Bow, you will transform into stickman with the bow. You have to adjust the direction by holding your finger and pulling behind the character. When you made a good aiming and lock the target, you release your finger to shoot the arrow. However, it is not easy for the arrow to go in the right direction. One thing you need to know in the game is that the headshot will cause more damage. If your opponent has no protective equipment, your shot even gets more damage. Therefore, you should try to target the enemies’ head and shot them down. After defeating the opponent, you will receive a certain amount of gold which can be used to buy new characters and weapons. There are many unique characters for you to choose from such as a street artist or a warrior. 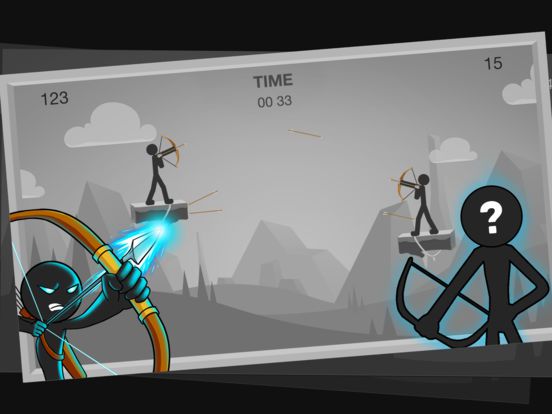 The game’s weapons system is also very rich. You can unlock different types of bow and unique design both in shape and colour.

Hundreds of levels and challenges

Mr Bow has hundreds of levels with increasing difficulty, each of which is very challenging for you. The higher the level is, the harder the opponent will be. Sometimes, obstacles will appear, such as a wood that automatically moves up and down. These factors make the battle more dramatic and unpredictable.

In addition, game has two game modes including Campaign and Solo. You can challenge your friends or any player in 1vs1 mode. In Campaign mode, you must in-turn defeat the enemies of the dark world. If you fail, you can continue from the last enemy who defeated you instead of playing the game from the beginning.

Mr Bow has extremely simple 2D graphics with two main colours, white and black, so the game is easy to use with low-profile devices. Besides, the characters are also designed in a minimalist way. The best way to mix and match with funny details brings a truly fun gaming experience.

With a simple design, interesting gameplay and optimized graphics, Mr Bow won the hearts of many players. After a hard working day, this game is really an effective method for you to relax. You can download the Mr Bow MOD APK version below. If you have any question about the game, please leave a comment below! Thanks and have a fun game!