In the gaming market, Lion Studios is a popular publisher with many interesting games like Happy Glass. After releasing this game, it received hundreds of millions of installs from Google Play. And this has made the name of the publisher Lion Studios. As a driving force for creativity, they continued to launch another great game called Mr. Ninja. This can be seen as the next version of Mr. Bullet, an extremely popular game in 2019. At the moment, Mr. Ninja promises to become an addictive game in 2020. Please join us to find it out right now!

Mr. Ninja APK MOD is set in Japan which was being adversely affected by gangsters with criminal acts. It causes disturbance and threatens people. They made many fights, causing people to live in fear. As a little hope, you appear to free them by destroying these gangster organizations, including assassins and ninjas. 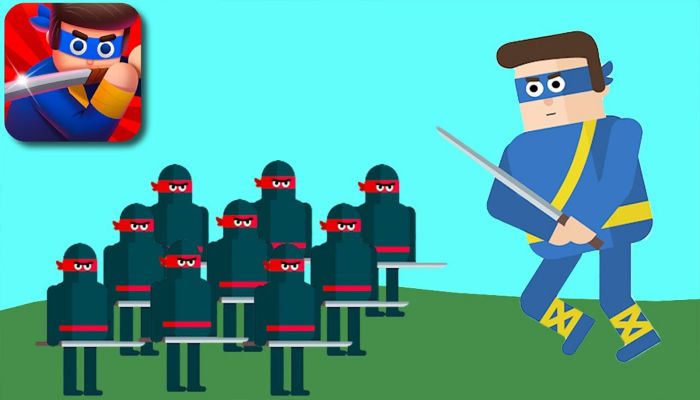 The gangsters are dangerous guys. To destroy them, you must practice more and more, and become a good ninja. Unlike the movies, ninjas often have superior strength, who can destroy enemies very fast. In Mr Ninja APK MOD, your enemies are very skillful. They are even capable of defending so well that you cannot touch their bodies with just a sword or some simple moves. Therefore, you must find other methods and tactics to become a winner in this war.

Besides, Mr Ninja APK MOD has a lot of items that you can use when fighting such as wooden bars, iron barrels, bombs… In which, you should pay attention to the wooden bars. They can easily be cut into pieces. When they fall on the enemy or make them fall, they will die. Also, with the iron drums, your sword has no effect at all in this case. At this point, players should find the bombs and detonate them. The range of effects of explosives is enormous. They are all placed in a dangerous position so you can finish the enemy. But sometimes, it can also be hung up and you have to cut off the rope to make the bomb fall to the fixed location.

When you reach a higher level, it is also time you face more difficulties. The evil ninja appears in a position that is harder to kill. Moreover, the logs and the bomb appear less and less. Also, the game adds the hostage to the level. You need to remember that your most important goal is to rescue them. If you hurt them, you have to play that level again. 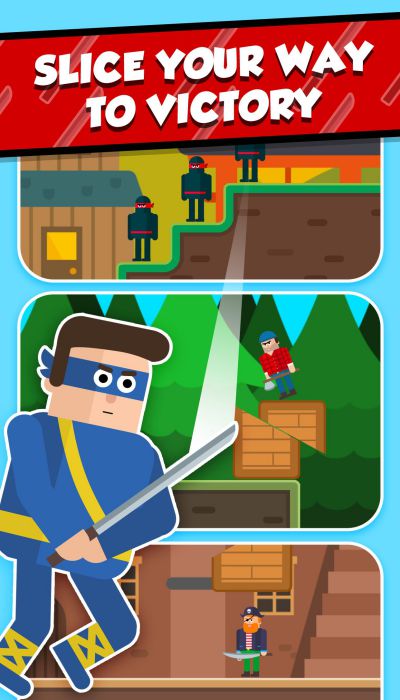 Every time you complete a level, Mr Ninja APK MOD evaluates the achievement through a rating equivalent to one, two, or three stars. The higher the rating is, the faster the unlocking process of a new character will be. Of course, it will give you more bonuses. Sometimes, you also receive a special item, Golden Katana, a sword so strong that it can cut any ninja’s sword and end their life.

If you are too fed up with swords or they are no longer effective at high levels, you can practice new weapons. At this point, we recommend you darts, which have more damage and attacking range. Besides, it is an indispensable weapon of a ninja. The control is quite simple. Gamers just touch the screen, drag to aim, drop to shoot and kill all enemies. However, darts can bounce back when they come in contact with surfaces (ground or iron objects).

In this game, players can change the shape of your character and weapons with skins. When you start Mr. Ninja, you will receive Mr. Katana and a Katana weapons set, including swords and iron darts. During the battle, the skins will be unlocked. One of them is free but requires you to watch promotional videos. I got Dr. R. Hochet, Ms. Katana, and Mr. Speedo after 10 levels. They look quite interesting. As for the weapons kit, I used my money to buy them in the store. It was the Rainbow Wand, which looked quite similar to a magic staff attached to the golden star. But the color effect when this weapon collided with the enemy is very nice. Besides, the game also has Poisonous Sting, Trident of Poseidon, or bloody axes and aliases Bloody Hax. 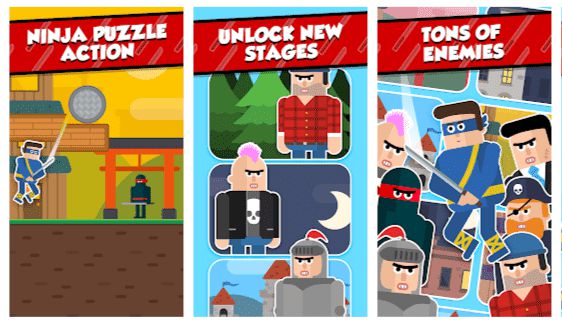 Mr. Ninja APK MOD is a simple but interesting game. More importantly, it helps you have a sense of entertainment and make your free time more fun. Besides, we would like to bring you the modified version of the game named Mr. Ninja APK MOD (Unlocked). It has already unlocked all skins for you to enjoy without paying anything. Readers can download the game at the link below. Thanks and have fun!