Pirate Raid – Caribbean Battle offers players simulation gameplay, so it’s not difficult to imagine the activities you have to participate in. This game has a pretty good idea of ​​​​the gameplay that players can actively do many things around the main missions. Specifically, you can freely hunt for cargo ships as well as other objects such as sea monsters, other pirate ships… Because the game has no time limit or network, you can freely do what you want. However, players must pay attention to completing tasks to be able to level up, thereby having enough strength to reach further seas. Besides, upgrading the ship’s parameters and the island is the most important thing. Specifically, you have to upgrade the ship so that it can withstand higher damage, shoot stronger… As for the island, gamers have to upgrade the storage capacity and coverage of the lighthouse. An important note for players is not to die during the hunt. If your ship is sunk, you will lose all your loot. In case your ship has low health, you should quickly return to the island area for automatic healing. 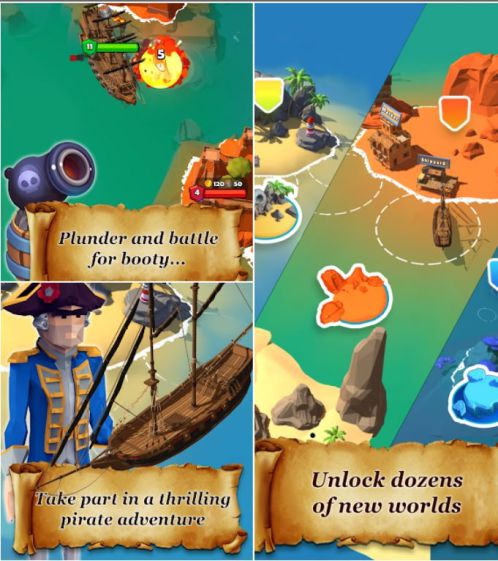 Key points that players need to pay attention to:

– Focus on completing tasks: In Pirate Raid APK, you will easily see the progress of your mission above the screen. At each task, it will have an explanation for you to make it easier to do. Also, players will receive many interesting rewards after completing the task. They can be gold coins, experience points, or golden keys to unlock treasures.

– Upgrade ship and island: Players will need a certain amount of experience points to level up at each level. Upgrading ships and islands is also the fastest way to gain experience. First, players should upgrade the ship’s cargo stats to be able to carry more crates. Then there is the amount of blood, damage, gun … Besides, they must upgrade the lighthouse to be able to expand his sea vision. However, upgrading the lighthouse requires the right route and resources. If you think your area is good enough, you should upgrade your ship first. However, players should balance their gold and cargo. If you need gold, you should sell the cargo you have to be able to upgrade the fastest ship.

– Unlock new islands: After completing the series of missions, players will be able to unlock new islands. However, you will return to level 1 on this new island and do the same things as on the old one. But the interesting point is that each island has a different structure, giving players many new feelings. In particular, the enemy troops on the following islands are stronger than on the former ones. Besides, players will definitely like the sea monsters. They are very powerful but also carry loads of valuables.

Pirate Raid has pretty smooth graphics on mobile platforms. The control of the ship is quite easy with a touch operation on the touch screen. Besides, the image is also quite bright, attracting players’ attention a lot. Sound is also a plus point of this game. The producer’s harmonies are performed excellently, like a hymn of great battles. In addition, the battle sound also makes the game more aggressive. You will definitely love the way sounds are added to this game.

In this article, we would like to send you the APK file of the game for free called Pirate Raid APK. We will regularly update new versions as soon as they are available. Readers can download them from the link below. If you have any questions about the game, feel free to leave a comment in this article. Thanks and have fun!