Raft Survival is a role-playing survival game. It has been attracting a lot of players today on Android and iOS mobile devices so far. In the game, players have to face a harsh life floating on the vast ocean. So, how to survive alone! Please join us to find out more about this interesting game in this article!

Raft Survival – Simulation game takes you on a dizzying adventure. The plane crashed and fell down in the ocean. Some passengers were still alive then their main goal was to try to survive and collect debris to build the raft. Join Raft Survival, players will have to find and collect crates. In which, there may be foods or other materials. You can collect items to make them into tools for surviving at sea or fighting. Moreover, the shark is trying to crush your raft at any time.

Also, Raft Survival has a multiplayer game mode, in which you can play with friends or other online players. At this point, you can build a raft together and craft other great equipment and weapons or fight against aggressive objects under the sea. 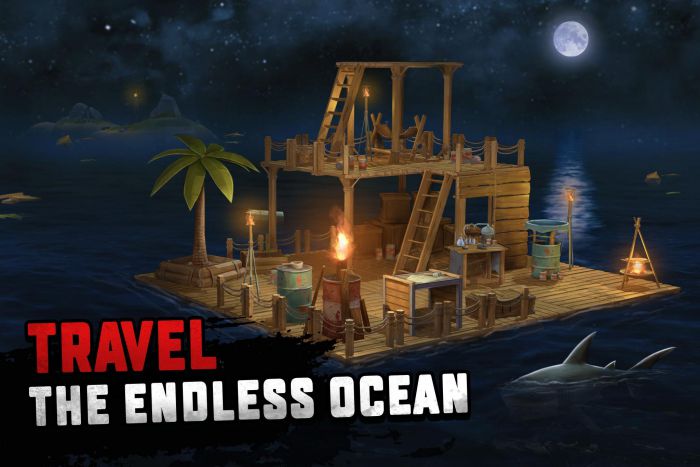 Use a hook well

The fishing hook is one of the most useful and important tools, helping you to collect valuable items floating on the sea such as wood, drinking water, leaves, plastic pieces, wood chips, metal fragments… When you master your hook, the more items you can get. As a result, you can create more tools and build your sea empire faster. 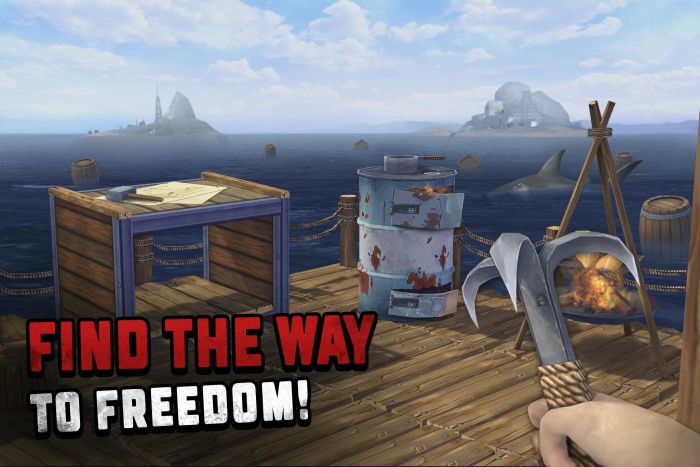 Look for food and water

Drinking water and food are the most important things in life. In the game, they are not exceptions. You need to have the energy to survive in the survival game at sea – Raft. Besides, you need to make fresh water to drink by using a seawater heater.

Next, it will be the food. The amount of food in the sea is not as abundant as on land, so you need to immediately build a fishing rod to catch fish. Raw fish can still eat against hunger. However, cooking it will be better. It will be more efficient. Players should build an oven, from small to large. Cooked food will restore more energy, last longer to be hungry, and save a little amount of food on the sea. 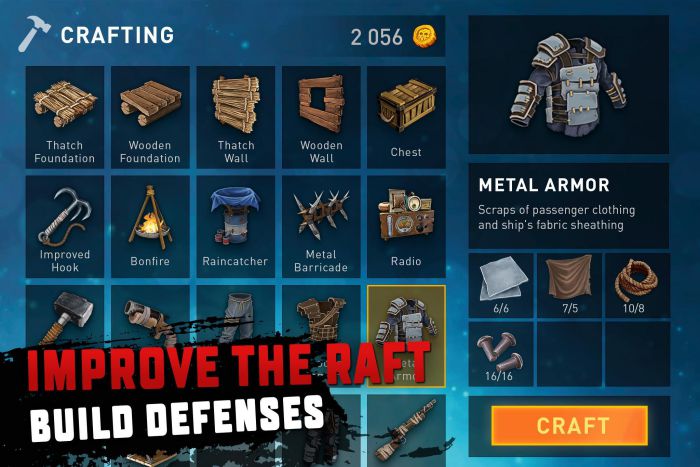 In the Raft, everything in the sea has its own use. But to create, the number of ingredients will increase gradually depending on the complexity of the item. With the original hook, you can easily craft simple items. With difficult recipes that require a large number of raw materials, players need to reserve the ingredients that they collect on the sea or the islands for use.

Besides, players can use the chests to store things on the raft. However, you should create a backpack to easily take many items to your raft if you are on the island. Also, you should pay attention to your raft status on the water – Raft. Creating and expanding the raft height and width will give you more storage space. Especially, players can easily pick up materials such as wood, plastic pieces, wood chips, metal fragments… right on the sea to upgrade their raft for free.

Moreover, there are many refineries to make life on your raft more prosperous and comfortable, such as fireplaces, fishing nets… You can collect as many ingredients as possible and build your own dream empire. 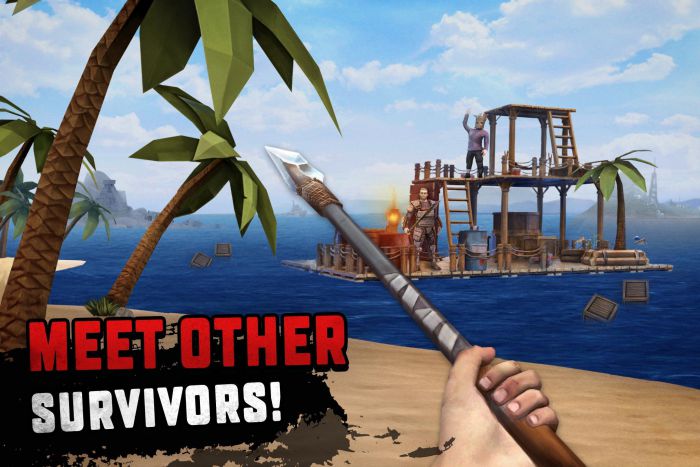 Watch out for sharks

In this game, players should not touch sharks when there is nothing in hand. Also, you should not try to destroy them when entering the Raft world. The cost is falling items, wasting time, effort and even life. Instead, you should expand your raft to avoid sharks.

Crafting a rudimentary wooden spear helps repel them when they try to bite your friends. Pay attention to the shark’s back. If they have many scratches, that means they are weakening. At this point, you can kill them easily and quickly. Shark meat is quite energetic, so you should take advantage of this nutritious food source. 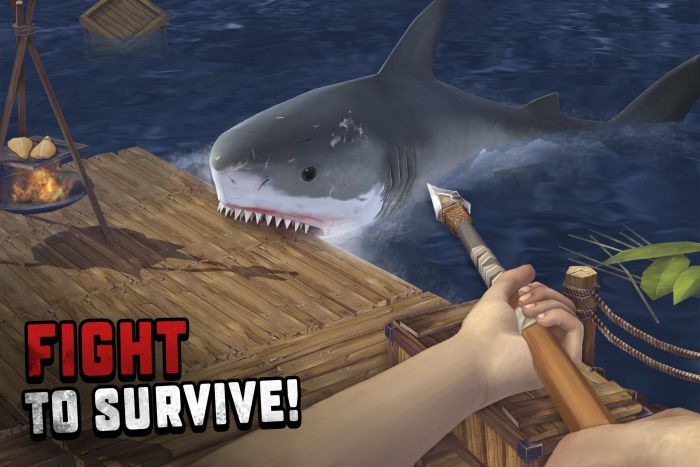 In this article, we would like to bring you a modified version of the game. It will give you a more advanced feature, which is unlimited money. It means that you can buy or upgrade items with an unlimited budget.

From nothing, you must survive and build your own empire at sea. With just a raft and some simple tools, Raft Survival APK MOD will challenge your ability along with creating many interesting moments of survival. Also, the game has a day and night system that makes the game more realistic than ever. Readers can download the game at the link below. Have a fun game!