Ragduel MOD APK (Remove Ads/Free Upgrade) is an interesting physics shooter game for mobile devices. It was released by VOODOO, the popular game maker with many simple but exciting games in the market. Surely, Ragduel is not an exception, which will bring you the best gaming experience. If you are bored with the usual shooting games, Ragduel will make you enjoy with simple but extremely intense gameplay. Please join us to find it out right now!

Ragduel’s gameplay is quite simple, which is a suitable game for all ages. In general, you will play as a Western marksman gunner, on an adventure journey in the arid deserts. Players have to control a character and fight against the Indians and other gunmen. They’re trying to cause trouble, and you probably don’t want that to continue while you’re there. At this point, players have to prove their skill at shooting and win the title of “Best Gunner in the West”.

Although Ragduel MOD APK has only 20 levels at the moment, each level has up to 4 confrontations and a reward match. You will spend quite a bit of time to conquer the challenges of the game. Also, the publisher will regularly update more new content. 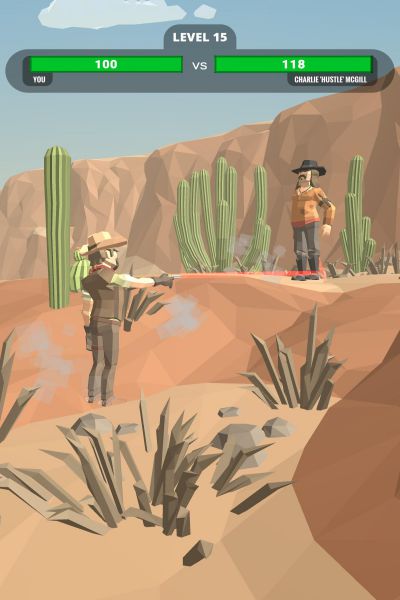 You need to hurry if you do not want the opponent to take you down. If you miss, you will be defeated. At this point, you will have to play again from the beginning of the level. Perhaps no one wants this to happen, but it’s unavoidable. In the game, players need to act more carefully. When you are in a higher level, it means you have to face more talented fighters. They had many years of adventure experience on the Western meadows.

When you defeat the opponent, you will unlock more unique and powerful weapons. If you want to get them, you need to accumulate bonuses after each battle to buy. Besides, you can upgrade the character, enhance health and agility.

During the fight, the faster you defeat the opponent with the less injury, the more bonuses you will receive. Ragduel MOD APK encourages accuracy and difficult shots. Therefore, you will get $10 more with each headshot. After passing four opponents, you will take part in the reward match. The content of these matches is quite interesting. Specifically, players will shoot animal effigies (unicorns, horses) to let them drop money, or demolish a tower made of drums or wooden barrels. 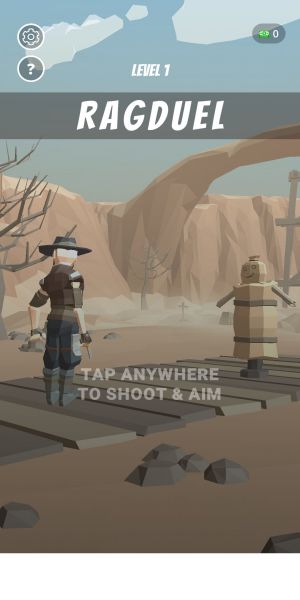 Ragduel has no instructions for beginners. For the first time I participated in the game, I was quite confused because I didn’t know how to make the cowboy shoot the enemy. Also, the cowboy has a laser gun but his arm looks rather loose and could not lift. After struggling for a while, I understood part of the shooting mechanism. Specifically, players have to quickly pull the trigger as his arm swings backward. The swing creates a thrust that helps the arm lift higher.

On the game screen, it will show yours and opponent health bars. Shooting in the leg or arm will only reduce 1/3 of life. Shooting in the body will be halved while the headshot can take all life. I think you should focus on quality. This helps you end the fight more quickly instead of trying to shoot without control. Meanwhile, the shorter the battle is, the greater the reward will be.

Because this was a 1vs1 match, there was no defense or evasion mechanism. To win, you only have to take the opponent down before he can defeat you. If you have experience of fighting, you can shoot at the opponent to make him lose his gun. 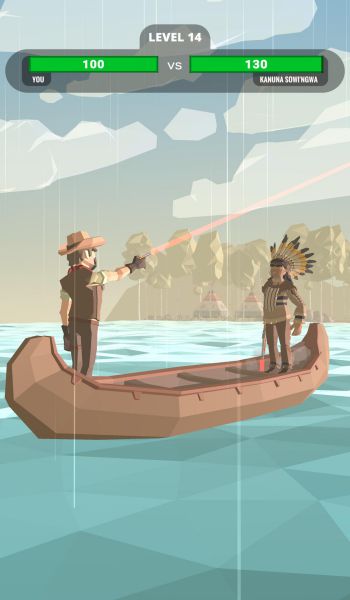 Ragduel’s context is designed on a 3D platform. Overall, they are not excellent. However, it is still quite beautiful and sharp. You will adventure through deserts, rainforests, and boats at sea. Also, we appreciate the lighting effects and movement when the character shoots. They depict scenes of Western cowboys fighting guns most honestly. Besides, most of the details are motionless, except for the arm and eyes watching the target.

Although the game has had more than 1 million downloads, it has still received quite a few positive reviews. Perhaps the manufacturer has inserted too many annoying ads for players. To solve this problem, we would like to introduce to you the modified version of the game named Ragduel MOD APK (Remove Ads/Free Upgrade). In which, the game not only remove all ads that cause interruptions but also upgrade all features for free.

Readers can download the game at the link below. If you have any questions about the game, please leave a comment in this article. Thanks and have fun!