Shadow Fight 2 is the sequel to the famous martial arts game title in the mobile game community, Shadow Fight from the NEKKI developer. The game is considered the legend of the gaming market with attractive fighting gameplay and beautiful graphics. Moreover, the players will always be excited when the game pace changes depending on the gamers’ play style. Let’s together with modgameapk.net to check it out right below! 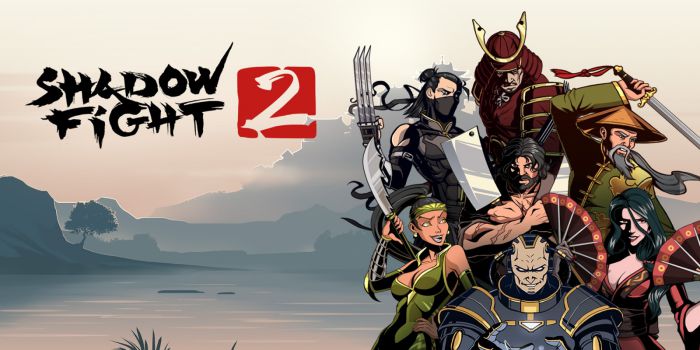 Shadow Fight 2 is built on an intensive and creative storyline. It begins with a dark warrior, who had the ambition of strength so he traveled around the world to find somebody who can defeat him. One day, when he went to the “dark land”, he found an ancient relic. He opened the door of the night and freed the captive darkness spirits. Then, he was possessed by the dark spirits and became a mysterious shadow. Now, in the form of a shadow, he must redeem his mistake by destroying all the souls to regain his body and destroy all enemies.

Shadow Fight 2 has the same gameplay as Mortal Kombat X – the great fighting game that we introduced in this article. In the game, you will play the role of Shadow. This is a black shadow hero, who takes part in the 1vs1 battle. In which, gamers can use virtual keys on the screen to move, attack and dodge enemies. Besides, you can combine them to create amazing combos, kill opponents with critical skill.

In addition, you can practice using the combos as smoother and more beautiful. This is an effective method to quickly get acquainted with the game for new players.

Shadow Fight 2 allows you to upgrade your warriors with new weapons and armour for improving your attack parameter and increasing stamina. Moreover, you will receive money as a reward after each battle. You can use this to unlock more skills or upgrade the existing skills for better damage.

Shadow Fight 2 is divided into many stages with increasing difficulty from easy to hard. With 5 levels including Easy, Normal, Hard, Insane and Impossible, Shadow fight 2 really succeeded in making it challenging for players. In the Easy, Normal and Hard levels, it is quite easy to win. However, things are more and more difficult in the Insane and Impossible levels, which will sometimes make you depressed. You will have to stop the game many times when approaching these two levels. Also, the difficulty will increase, so you have to have accurate moves as well as perform the combos well.

The control of Shadow Fight 2 is also very intuitive with the virtual key system consisting of an 8-way joystick and 4 buttons (punch, kick, throwing darts and critical skill).

When entering the game, you will need to conquer 7 main bosses in 7 chapters. The bosses will gradually get stronger which is not easy to defeat. Besides, you can also unlock a lot of characters with unique designs and skills. This is also an extremely interesting feature of the game.

Shadow Fight 2 is designed with 2D graphics with a black background. However, the character has been more beautifully designed. It is no longer a piecing cube-like in version 1. The scene of the game is also built very meticulously and features the ancient Japanese style. Besides, the skill and weapons effects create an incredibly “action movie” right on your mobile device.

Shadow Fight 2 is one of the best fighting games on mobile both in terms of charismatic gameplay and beautiful graphics. At the moment, you can download Shadow Fight 2 APK MOD with modified features, which will give gamers more great gaming experiences. Don’t forget to follow modgameapk.net to get more interesting games and apps! Thanks and have a fun game!