Survival Heroes Apk is a great MOBA game, which is highly appreciated by gamers. It is a perfect combination between PUBG and League of Legends Mobile from Gamota in middle of 2018. Thereby, this product is a combination of two popular game genre including MOBA and SURVIVAL. Especially, if you have ever played through games like League of Legends Mobile, Garena Free Fire or ROS, you will quickly get used to Survival Heroes’ gameplay.

How to play Survival Heroes

With familiar survival gameplay, in the beginning, players will parachute on any location on the large map. At this point, you have no weapon or equipment. Your task now is looting, collecting the equipment and support items to fight with other players. In parallel with the map looting process, you also have to hunt the monsters to level up. The more you kill, the higher your level, as well as the greater your strength and resistance ability will be. In addition, you have to pay attention to the BO circle, which is shrinking gradually. You have to run quickly into it to not to lose the blood or die.

In addition to survival factors, the gameplay is mainly MOBA fighting element. The player can use various types of supporting, locking and attacking skills to fight or escape from the enemy. In Survival Heroes, the gameplay is also as stressful, nervous and competitive as the survival game series or MOBA. This is the factor that makes Survival Heroes attractive to gamers. 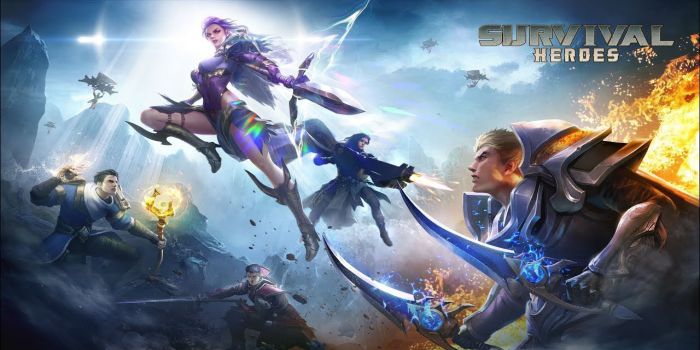 Gamers go to the game settings section to install the most suitable controller. This setting will greatly affect your movement and battle. You should choose the installation method that suits your playing style. There are 2 parts in the settings menu including the default settings and advanced settings. In this menu, you can also change the graphics settings to match the device’s configuration. 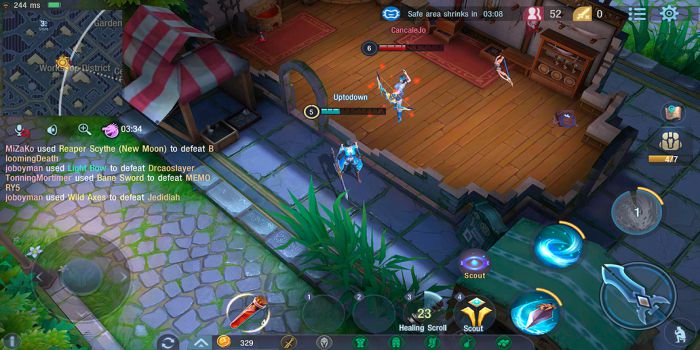 How to choose the parachute location in Survival Heroes

Before jumping out from the plane, you need to see the map for the flight route and choose where to land on. You should mark it on the map. If you want to get really fast, you should jump into large areas or residential area, in which there will have a lot of items and weapons.

How to fight in the battlefield

The best weapons in the game: 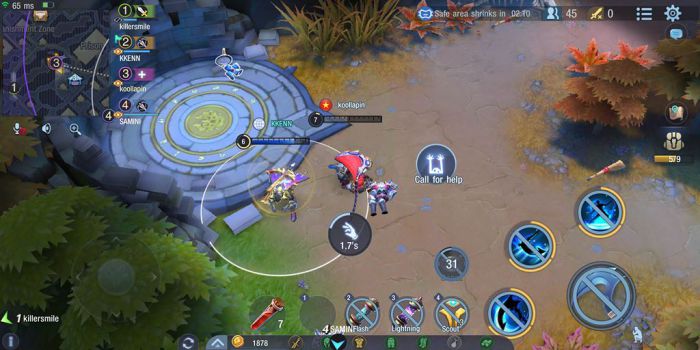 The diverse weapons and equipment system

Besides the MOBA gameplay combined with the new Survival, the rich weapons system is also a plus point of Survival Heroes APK. Not using guns or bombs like other survival games, Survival Heroes uses a system of weapons from melee to long range up to 30 different types including swords, swords, bow and arrow… Each weapon has different advantages and disadvantages, which help create hundreds of skills for gamers. Survival Heroes focuses on the great skills combo, in which you can actually master each weapon to destroy the enemy quickly. In addition to the weapons system, the role of role-playing is also fully exploited when it added the level of the battle system for their characters. Besides, the player can combine items from armour, hats, chains, etc, which have their own power stats. They will definitely increase the fighting power for the character. Let’s take a look at the detailed manual of the weapon and equipment below:

The first and most important thing in this tutorial is to know about weapons and equipment. In the game, the game will provide you with a variety of weapons. Each has its skills, strengths and weaknesses. You should learn them carefully not to miss anything. When you know their characteristics of each weapon, it will help you choose your most suitable one to have many advantages in battle. The battle style includes melee range and long range. You just find out the weapon’s function and choose the right one.

After you choose your favourite weapon, you can select and set up your device that can maximize your weapon skills. If your weapon causes a physical attack, you should choose a device that enhances physical attack. If your weapon power is its speed, you should choose the device to increase the attack speed. There are 6 pages for providing the information of the equipment including helmet, armour, pants, shoes, necklaces (necklaces) and binoculars.

You can see all its weapons and skills in the Menu. In which, you can unlock some new weapons by spending gold or tickets. Moreover, you can refer to the use of the top players. 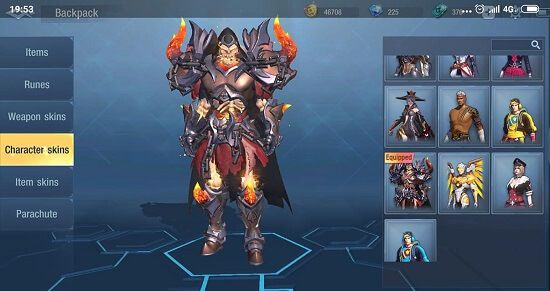 You can equip your character with Runes, which will give you additional indicators. These Runes are available from level 1 to level 5. The higher the level is, the better stats you character will receive. You can get runes from quest rewards, or you can also buy it by gold or diamonds.

In addition, you have to choose the runes that match your weapon. If you use physical attack weapons, you should choose runes that support your physical attack. Some players do not appreciate Runes because they think runes will not make any big difference in the battle. If two players are fighting with no equipment, the player with better runes will win. 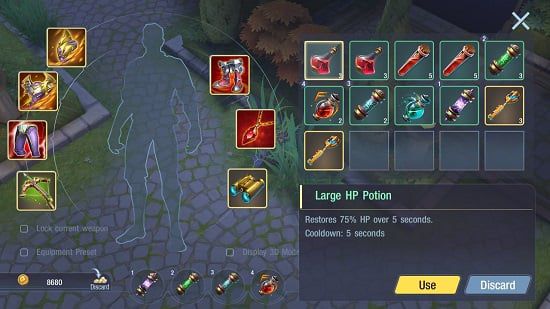 The Runes suitable for attacking purposes:

The Runes suitable for defence purposes:

Furthermore, the game has a beautiful and vivid graphic design. Survival Heroes is a unique combination of modern and classic graphics features, which makes the game more interesting and engaging. The game is equipped with 3D graphics and many beautiful effects that characterize the famous MOBA game genre. It will definitely satisfy gamers. Also, the design of the game is also very friendly, suitable for most ages. 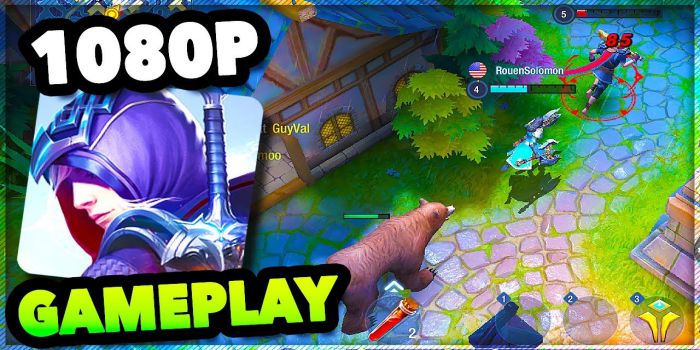 Survival Heroes APK is a great game, which is a struggle of levelling up, picking up equipment, selecting weapons and possessing skills and combat skills among the players. In this article, we bring players a special version of the game named Survival Heroes – MOBA Battle Royale (Mod Apk). It has been modified for players to have the easiest and most interesting experience. Let’s download and enjoy the game right now!