Tanks A Lot is a fun tank shooting action game from the makers of Highcore Labs LLC. This game is suitable for people from 10 years old. Players will delight in struggling and being creative in fighting and tactics in the game. Besides the simple gameplay and smooth graphics, the diverse game modes are also a plus point. In this article, modgameapk.net would like to deliver to you the MOD APK file with advanced features, which will make your game more interesting. Please join us to learn more about Tanks A Lot MOD APK (Unlimited Ammo)!

Tanks A Lot MOD APK has simple gameplay. Players only need to use the pointers and touch operations on the screen to control the tank and fight easily. Specifically, the left side of the screen will be the movement keys, and the right side will be the function key that helps you to fight. Besides, each match will take place within 1 minute. You and your 2 teammates just need to focus on shooting down enemy tanks. At the end of the match, the team with the most kills will be the winner. However, players must pay attention to a few things when participating in combat. One is, that your ammo is limited. After running out of the bullet, your tank needs a certain amount of time to cool down. But you don’t need to wait until the load is full. Instead, you can fire as soon as you finish loading the first bullet. Note, when you run out of ammo, you should move continuously to avoid enemy tanks or hide in bushes. Second, if your tank is dead, it will be revived. However, because the match only lasts for 1 minute, time is extremely valuable. Don’t get killed too many times in a match. 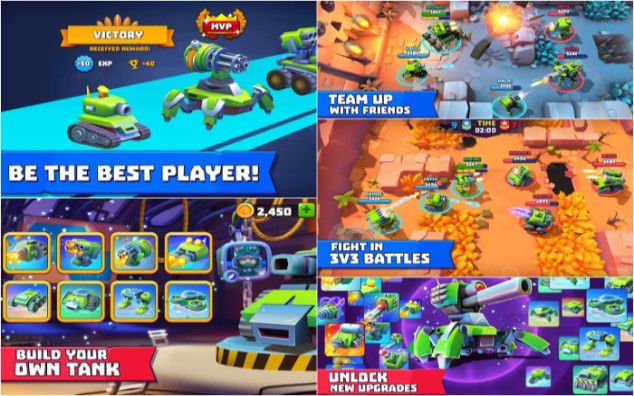 Like Mech Arena, players will have to collect cards to unlock accessories to upgrade their tanks to more powerful. Besides, you need to earn more gold and diamonds to be able to buy more things in the shop. An interesting point that every player will love is being able to customize their tank so that it is most impressive. Specifically, gamers can upgrade and change the details of the vehicle such as the gun, the base, or the skin. This makes your game more interesting.

Currently, Tanks A Lot provides players with 4 basic modes including:

– Team Deathmatch: shoot your classic tank in style in the thrilling and engaging Mortal arena mode: This is the most basic game mode for players. Specifically, you will match random teams with BOT or online players into 1 team and fight another one. How to play as above we said.

– fight for resources in Brawl mode

– Soccer mode in Tank-O-Ball. At this point, players will engage in a fierce match but with tanks! 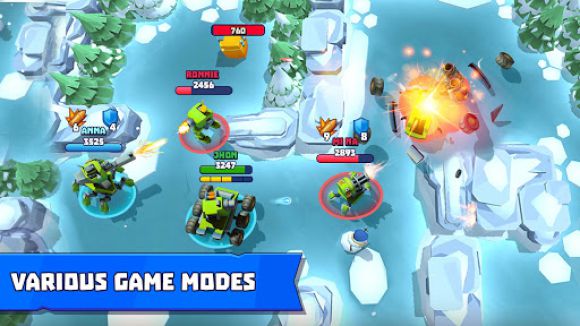 Different from the simple and cute look, Tanks A Lot owns an extremely large number of items. You can collect, unlock or buy many things to customize your tanks such as guns (machine gun, Plasma, Lazer…), bases, or Skins. Players will find themselves lost in a commercial center dedicated to tanks. In addition, you can also unlock new commanders. Each commander gives your tank new, more powerful stats.

In this article, modgameapk.net is pleased to send you the MOD APK file of this game at Tanks A Lot MOD APK (Unlimited Ammo). With this feature, players will not need to dodge enough. Instead, you can comfortably fight without worrying about dying. Please visit the link below to download it now. If you have any questions about this game, please leave a comment in this article. Having fun!

● The Frozen event is coming!
Play “Frozen” mode, win several times in a row and unlock the second mode called “Invasion”. Сollect fireworks and get an exclusive set which includes Candy Crusher cannon, Comet base and Tank-o-Claus commander!
● Other improvements and bug fixes.