Teen Titans Go Figure is a great mobile game, which was built from the cartoon animation idea of ​​Cartoon Network producer. The well-known American studio has a lot of animated films that have gone into the subconscious of a large number of viewers around the world. In which, Teen Titans, an animated film about DC Universe’s age-old superhero group, is as the most out-standing impressive film. With the success of Teen Titans in 2016, Cartoon Network and Grumpyface continue to develop a sequel called Teen Titans GO Figure (Teeny Titans 2). The game immediately attracted a huge amount of attention and response from the gaming community.

In Teen Titans Go Figure, players will participate in fierce 3v3 battles, in which you can perform great skills in real time with the fighting bar. Besides, the operation is simple. You can switch between multiple heroes to launch powerful attacks and defeat opponents. After defeating them, you will receive coins and gems. Coins are also scattered across the map, which you should collect and accumulate to upgrade the characters. Of course, the number of coins that the game requires is huge, so players need to work hard or participate in big battles.

In addition, gamers can choose the story mode to play the role of any Titan such as Robin, Raven, Cyborg, Starfire or Beast Boy… Each character has a unique voice from the movie dubbing actor and actress. Besides, the characters in Teen Titans GO Figure automatically fight so players do not need to do many operations. Instead, you just need to choose skills or move back or forth among the three characters. Each of them has a different power corresponding certain stats. Therefore, you should choose your character with suitable skills. With just a few touches on the screen, you will be travelling through many of DC’s famous cities like Metropolis or Gotham. In which, you can make your dream of becoming a hero come true, fighting and protecting justice for the people of the city. One thing you should know is that the tofu blocks on the screen help the heroes get more power in a short period of time. 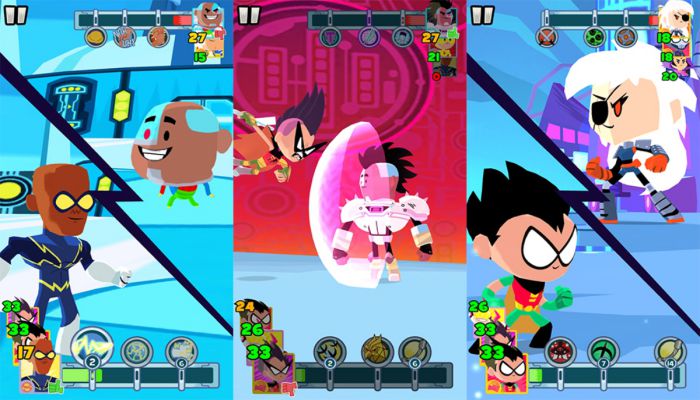 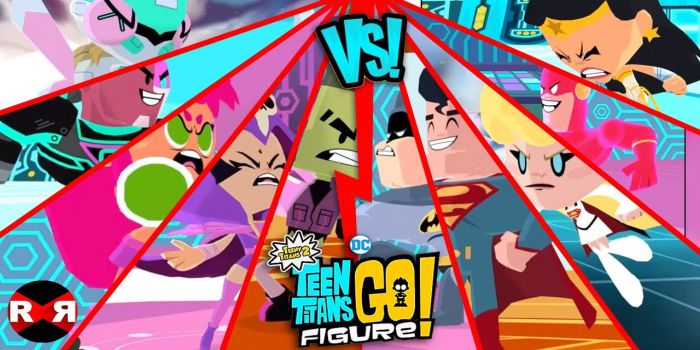 In the game, you will be fighting in cities with beautiful designs. Jump is one of them. Step into Jump to buy the essentials for your favourite superhero and complete the special mission of the DC heroes. Besides, you can join the tournaments of Teen Titans Go Figure.

The game has a lot of common languages ​​in the world including English, French, Italy, Spain (Latin America), Portugal (Brazil), Russia, Turkey, Korean and Japanese.

Teen Titans GO Figure is a game for all ages, especially children, so the game’s graphics also intends towards being bright, fun and colourful. There are many changes in the colour of this version compared to the original version. The black and blue costumes of the characters are changed into bright and more colourful. Moreover, the game also allows players to customize the outfit colours for the characters. Instead of Black, your Batman will have more cute costumes in blue or red. In addition, the game still leads the player to follow the main plot because it retains the original design of the animated and comic version.

Overall, Teen Titans GO Figure has mission completing gameplay and a fun plot. Besides, the design and bright graphics background of the game is also worth your download and experience for the relaxing moments. In this article, we provide you with Teen Titans GO Figure! Mod APK + OBB v1.1.10 [Unlimited Money]. It is a modified version of the game, which will give you a lot of money for shopping and unlocking characters. Let’s download and enjoy the game right now! Thanks and have a fun game!