The Labyrinth of Ragnarok is the latest mobile game under IP Ragnarok Online from Gravity. This is an idle role-playing game, in which you lead your favourite Ragnarok warrior to fight against other players and monsters. Because it is licensed from the online PC game, The Labyrinth of Ragnarok will give you the full experience of great characters from the original product. Please join us to find out more about the game right now!

In this game, the way to play follows the direction of the Idle genre. Right after entering the game, players will be in the maze, in which your only task is to fight and upgrade the strength of the character. The game has followed certain concepts of the idle RPG genre, like the system for you to watch your characters fight. Meanwhile, the player’s interaction stops at converting and upgrading equipment as well as summoning new allies to try to sweep into the caves, tower floors as high as possible.

Besides, the fighting system strictly follows the Idle’s gameplay. Instead of having to control the character like other role-playing games, they can use skills automatically and randomly. However, The Labyrinth of Ragnarok does not lose the attractive element of an RPG. Also, players can walk around the main castle, picnic map, and look for new allies to help. You can join many activities, such as Trading hunting, Boss, Arena, Guild battle…

In addition to hanging up the pick-up training machine, players will spend more time upgrading the character’s power from enhancing attribute stats, learning skills to upgrading weapons and armour.

After going through the promotion at the first stage, players can choose 1 of 4 character classes including Swordsman, Archer, Mage and Chaser. When you reach a higher level, you can continue to upgrade your character to the Knights, Hunters, Wizards and Assassins respectively with a completely new skillset. 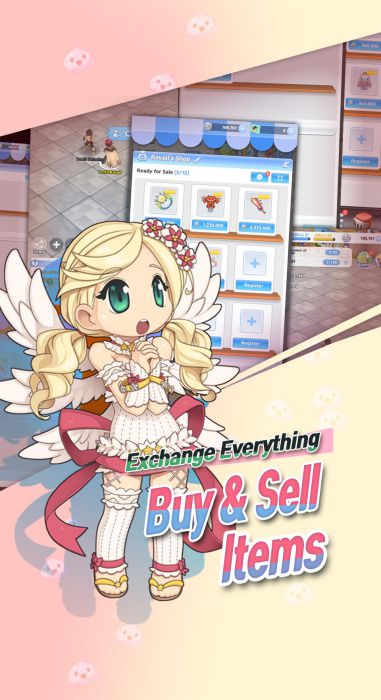